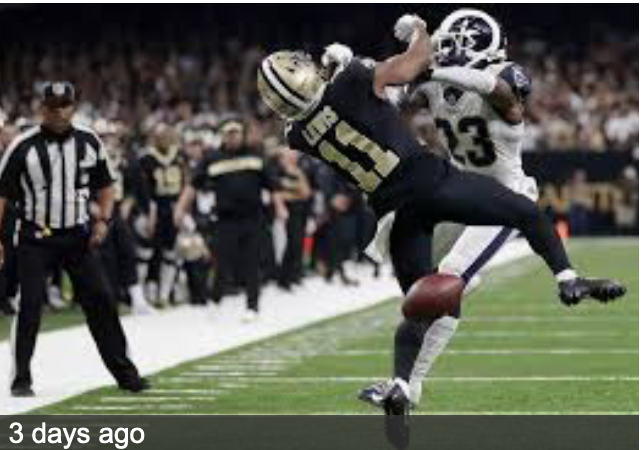 Anyone who accesses a communications medium that covers football has learned about the obviously blown “non-call” in the Saints-Rams playoff game.  The most idiotic coda to this story is that the Saints filed a lawsuit in Louisiana State Court, which the NFL has moved to get the suit transferred to Federal District Court.  The basis for the suit: a demand by the Saints that the NFL order the game replayed from the point of the officiating error.

For those not familiar with this story, the game was tied 20-20 with less than two minutes left in the game.  The Saints attempted a pass. The Rams defender clearly interfered with the Saints’ receiver, which should have triggered a penalty call. No penalty call was made.

The officiating error in failing to make the penalty call was undisputed.  It probably, but not certainly, cost the Saints an opportunity to win the game with a 3-point field goal so close to the end of the game that it would have been almost impossible for the Rams to tie.

However, it did not prevent them from regrouping and winning the game, either in regulation time or overtime.  They failed to execute after the blown call.  It also was a critical play only because the Saints were not too far ahead for the Rams to catch up.

The Saints are unlikely to win, but if their lawsuit were successful, the potential for replaying every playoff game from the point of an officiating error is real.  The lawsuit assumes that this was the only error made, that the Saints would have made a field goal to win the game at the most opportune time, and that the Rams would have had no potential for a play to score a touchdown.

Beyond the idiocy and lack of merit of this lawsuit, what interested me is the degree to which so many people are incapable of accepting responsibility for bad outcomes.  In a more perfect world, the Saints and their attorneys should be penalized when they lose and forced to pay the NFL’s legal fees and expenses.

The bigger issue is that too many people and organizations are too quick to blame others.  We are too comfortable with the “victim” role.  That is bad for society.

My parents, particularly my Dad, reacted to my complaints about things that went wrong by making me focus on what I could have done differently.  On one such occasion, he said: “If something matters in your future life, do not leave it to chance.”

I have generally not wasted precious brainpower on blaming others.  I take ownership of every decision I make and every outcome from that decision.  I acknowledge that factors outside of my control sometimes make certain outcomes more probable, but I focus most on what was within my control.

Obviously, I defend and retaliate decisively against anyone trying to harm me or my family.  In the January 28, 2019, issue of The Wall Street Journal, columnist Andy Kessler wrote a piece about cyberwarfare entitled “Strike Back Against Every Cyberattack.”   I agree.

However, as a society, we spend too much effort challenging adverse outcomes that resulted from human error and trying to assess blame for them, instead of focusing on how to prevent them from recurring.

I secured my first senior operating leadership position at Pitney Bowes in 1993, the Presidency of Pitney Bowes Financial Services, because the company had suffered a major credit loss in its German financial services operation.  My predecessor’s failure to address what happened cost him his job.

When I took over, I recognized that every senior staff leader and some of the line leaders were terrified that I would look for additional people to blame.  I did not.

Instead, we embarked on an in-depth investigation of the disaster.  I committed to everyone involved that I would not use the findings to terminate any of them, unless we discovered fraud or malfeasance.

When I became Pitney Bowes’ CEO, our share of revenues and profits from financial services businesses was comparable to GE’s.  The difference is that they retained and even grew these businesses as a share of GE’s revenues and profits, because they did not have a major setback like we did.  They never had to take an in-depth look at everything that could go wrong in a financial services business, so they continued to take on high-risk leases, loans, and insurance policies.

It is unlikely that we would have been free of these risky businesses if we had simply looked for individuals to blame for our German disaster.

One of the more insightful case studies for taking ownership of mistakes was presented by John Nance in his book Why Hospitals Should Fly.  Nance contrasted the “no-fault” and confidential investigative process the FAA has put into place for airline crashes, near-misses and even whistleblower inputs.  Airline safety has improved so much that crashes are extremely rare.

By contrast, unnecessary deaths occur every day from errors of various kinds in hospitals.  One bizarre example was described in this front-page New York Post story.

A woman gave the hospital an order to disconnect from life support someone she thought was her brother, except that the individual, who happened to have the same first and last name, was not her brother.  This is an extremely rare mistake, but so many other avoidable errors occur every day. Like other medical errors, this one was avoidable with more rigorous patient management and identification processes.

What makes hospitals so prone to repeated, avoidable errors and air travel so much less prone?  The difference is that the focus on after-the-fact investigation in airline issues is on diagnosis and prevention, whereas medical malpractice leads to blame and lawsuits.  The truth is often suppressed in the latter cases.

What should the Saints and their fans be doing today?

Instead of filing a lawsuit against the NFL and its officials, they should take a fraction of the resources they have spent or will spend on the lawsuit and “crowdsource “recommendations on how the Saints can improve every aspect of their game and their personnel decisions to be so much better that a single officiating mistake would not be costly.

The NFL should also look at its procedures and training for referees and for replays to see how in-game officiating can be improved, so that the likelihood of human error is reduced.  Because of the size of a football field and the speed and violence of the action, the likelihood that every mistake will be avoided and caught during a game is extremely low.

However, as the legendary coach Vince Lombardi once commented: “Perfection is not attainable, but if we chase perfection, we can catch excellence.” Let’s catch excellence and stop blaming others when perfection cannot be attained.