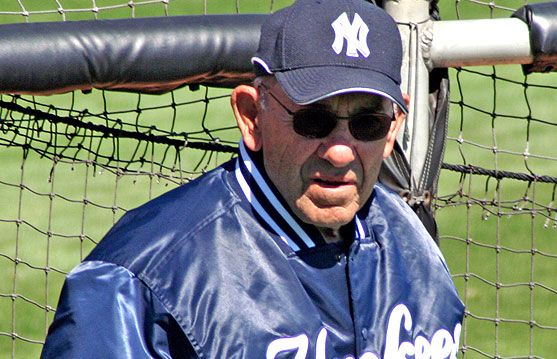 Much has been written and spoken about Yogi Berra after the announcement of his death early Wednesday morning, September 23, 2015.  Yogi Berra is one of my two favorite team sport athletes.  The other is Bill Russell.

Both athletes were key players on teams that won numbers of championships during their careers that are unlikely ever to be duplicated in their respective sports.  Russell played on a Boston Celtics team that won 11 championships in the 13 years he played, as well as on two NCAA championship teams at the University of San Francisco and one US Olympic basketball gold medal team.

Yogi had an even more phenomenal record.  As a player, his Yankee teams won 10 World Series out of 13 years in the World Series, but, more impressively, he secured three additional World Series championships as a coach, and one additional improbable World Series appearance as a manager of the 1973 New York Mets, which originated the phrase “You gotta believe,” because of the improbability of their success.

When I read a biography of Yogi Berra a few years ago, I was surprised that, although the Yankees won five straight World Series titles between 1949 and 1953, they were not as dominant in winning many of these World Series as earlier and later Yankees teams were in their eras, but they managed to squeeze out more championships in the close competitions than Yankees teams that preceded or followed them.

I make this point because even when the Yankees won during Yogi Berra’s career, many championship series were closely fought.  They needed seven games to win in 1947, 1952, 1953, 1956, 1958, and 1962 against great teams.  In effect, the contribution of a great player like Yogi Berra was more important to their success in these series because the outcomes were so close.

Berra also managed teams that were not as talented as their opponents, like the 1964 Yankees (an aging team) and the 1973 Mets (an overachieving team), but that he inspired to battle these far superior opponents to require the full seven games to win.

Similarly, Russell’s Celtic teams did not win their championships easily against inferior opponents.  They were battling the Hawks, Lakers, and 76’ers and had to win many seven-game series to succeed.

The reason I go into this detail is that it is easy to overlook the degree to which these two individuals were the difference between their teams winning a number of championships that will probably never be surpassed in professional sports, or being like the New England Patriots of the 2000’s or the Atlanta Braves of the 1990’s, great teams that did not win as consistently as the great Yankee and Celtic teams.  The margins between the Yankee and Celtic outcomes on the one hand, and the Patriot, Braves, or even the Buffalo Bills of the 1990’s, which lost four straight Super Bowls, on the other hand, were very small.

The difference can be boiled down to the Yankees having Yogi Berra and the Celtics having Bill Russell.  In both cases, the players contributed far more than what was reflected in their statistics.  Both were quiet inspirational leaders of their teams.

What made them exceptional?

Yogi Berra’s deep thinking found its way into popular culture because of the weird way he talked about things.  Take one of his statements, “It ain’t over until it’s over.”

At first glance, this seems like a redundant, nonsensical comment.  However, the comment had a great deal more depth to it. He was specifically commenting about baseball, which has no time clock and the opportunity of each team to make at least 27 outs before losing, as contrasted with football, basketball, and ice hockey, which have time clocks.  With time clocks, there is often a point well before the end of the game at which the outcome is certain if the score is lopsided. There is never finality or certainty in the outcome of a baseball game with even a lopsided score.

That quote articulates another much more profound point: until we die, there is always another opportunity to make our lives better.  America is not only a land of second opportunities, but a land in which the number of opportunities is unlimited until we choose to stop seeking them.

Buried inside of many “Yogi-isms” is a profound truth of this sort, which is why his impact is far greater than if he were simply a great, quotable athlete.  On more than one occasion, I have quoted another “Yogi-ism” to people working for me: “If you see a fork in the road, take it.”

I used that quote to make the point that if someone is faced with two potential paths or decision choices, the most critical step is to choose one and live with the consequences.  Many people, when confronted with choices, freeze up, which is often the worst thing they can do.

Great men and women have a long tail on their accomplishments, and Yogi Berra will be the same.

Yogi Berra embodied the American Dream.  He grew up in humble circumstances and left this earth 90 years later as someone who had journeyed very far from where he started.  He touched so many people’s lives positively along the way, and his life’s accomplishments will continue to touch many who long outlive him!