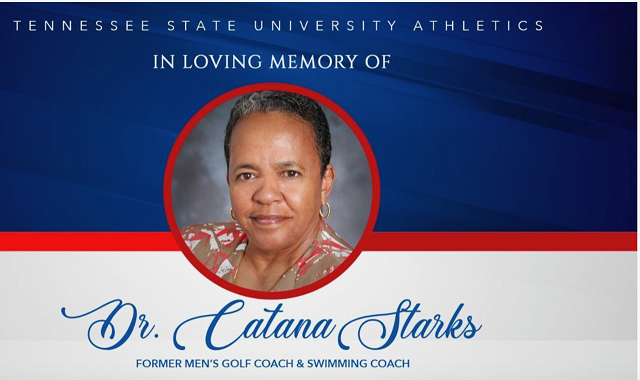 Dr. and Coach Catana Starks, the coach profiled in our film From the Rough, passed away on September 6 and was laid to rest on September 12. She was 75 years old. Her death caused me to reflect deeply on why I fought all sorts of obstacles to get her story told.

Dr. Starks secured a PhD in Human Performance and Sports Science from Tennessee State University and was also the first minority female to coach a men’s college athletic team. She was a coach, a full-time college professor, and a mother. She also broke new ground by recruiting international golfers to TSU, the vast majority of whom were Caucasians. She found golfers that were either undervalued or overlooked. She was unique and a pioneer.

However, something more kept drawing me to her story and caused me to be uncompromising on the story and messages I wanted to make sure the film communicated to audiences.

I have written previously about her accomplishments and there have been a handful of documentary segments about her. The best of them was the piece Michelle Miller Morial did in 2014, which aired on CBS This Morning.

However, the small biographical and personality insights that I gained a little bit at a time over the years, some of which I learned after the film had been released, gave me more insight into why this story was so attractive to me.

The first additional insight was learning from our film publicist Anna Fuson that Coach Starks had asthma as a child. Her family physician told her that she could never be an athlete or a musician playing a wind instrument. How did she respond to this discouraging medical assessment? She became an exceptional swimmer and track and field athlete in her home state of Alabama. She also became a great saxophonist. She seemed to go out of her way to focus on activities through which she could prove her doctor wrong.

The second, which emerged implicitly in her 2014 interview with Michelle Miller Morial, was that she never stated that her race either held her back or caused the most painful harassment. However, she was deeply angered about the many indignities she suffered as a woman. She was a shorter-than-average woman, and many male coaches disrespected her, as did her male department chair. She saw herself as a role model for women, not a role model for black coaches.

We did our best to reflect her view that being a woman held her back more than being a black person. This made the film appeal to some audiences, but not to others. Women of all races were inspired by the film; those who expected a hard-hitting profile of harsh racial conflict found the film too “soft” on race issues. Some of those most disappointed by the lack of focus on what she experienced as a black person were some of her golfers, who watched her live through racially demeaning experiences.

However, the insight about her that was most deeply important to me, and which resulted in a different approach to the film than that espoused by many Hollywood people, was that she was a uniquely and fiercely independent individual who charted her own course and fought for others based on their potential, not their credentials.

In her own life, her belief that she had the potential to accomplish what her physician told her was impossible was evidence of that. Her recruitment of undervalued international golfers in whom she saw potential that others did not also evidenced her focus on potential. Finally, her advocacy for second chances for those convicted of drug-related offenses sprang from her deeply held belief that they had unrecognized potential to be contributing members of society.

Many people who saw earlier versions of the film wanted the conflict between her and the Athletic Director, Paulsen, to be about the difference between his higher social class and her lower one. There would have been nothing wrong with this interpretation of Paulsen’s character. Social class and caste exist both within and across racial boundaries and have been highlighted by Isabel Wilkerson in her great recent book Caste.

However, I wanted to convey a different message about Catana Starks. During the first conversation in which she gets acquainted with Paulsen, she tells him that she wants to be considered for the job of men’s golf coach. Paulsen politely, but firmly, comments that she had never coached golf before. Throughout the film, Paulsen defines his self-worth by referring to success on paths others defined for him. He is proud of his accomplishments but is closed off to valuing others by their potential.

The Catana Starks Taraji P. Henson masterfully portrays in the film and the real Catana Starks both are best characterized in the scene in which the Starks character is lecturing Craig and the rest of the team outside the team bus. She makes three critical comments:

“We are all someone else’s table scraps.” (Meaning: “others gave up on us.”)
“But I don’t focus on the past; I focus on potential.”
She tells Craig, the one black golfer, who severely lacks self-confidence that he chokes because he has succumbed to the effects of “the soft bigotry of low expectations.”

Much later in the film, Paulsen expresses bewilderment to Roger, the janitor, about Roger’s decision to be a janitor even though, as a college football star, he could do anything he wanted “on the field.” Roger forcefully responded that black people had defined their performance on “fields” for too long in their history. As he put it, they spent too much of their productive lives on cotton and tobacco fields. Roger said, “The respect we seek has to come from within.”

Catana Starks was a person who wanted money, position and recognition, like the rest of us, but, most of all, she never compromised in fighting to be the person that would decide when she had reached the limits of her potential.

The tag line in the film at the time of theatrical release was
“It’s all about believing.” The honor which most people associate with me, my selection as Pitney Bowes’ CEO, did not come to me because I had the best credentials for the job, but because I had the highest potential among the candidates. Conversely, I was passed over for many opportunities because someone with higher credentials was selected, even though I thought I could have done the best job in the position.

In fact, one of the bittersweet comments I often received about the film was the feedback I received from individuals who confessed that they had delayed viewing the film for a long time because they did not want to have to figure out how to tell me that the film was not very good. When they viewed the film, they were astounded that, as someone who had never produced a feature film before, I had produced a high quality, inspiring film.

In trying to make sure that the power and reach of Catana Starks’ story far outlasts her life, I was fighting to tell a story with which many of us, including me, could deeply identify.

The real Catana Starks and the woman Taraji portrayed in From the Rough have a value set that is out of fashion today for many people. I have faith that our ability to believe in ourselves and to bring out the best versions of others, values both the real and fictional Catana Starks exemplified, will prevail.